Lent is coming, and I’m frankly not very excited about it. Disenchanted with a lot of Church-related things right now. But not necessarily with God-related things. There’s a bit of a difference, as far as I’m concerned.

The Catholic far right has ruined a lot for me. Tired of it.

Down another 2.2 pounds this week. I confess that I weighed myself a second time this morning after emptying myself, as it were, and I logged that (larger) amount of weight lost.

Still not increasing my activity level as much as I’m supposed to be. But I’m still burning more calories than I’m consuming. Doesn’t matter; I still need to get off my ass, even if only for 10 minutes at a time.

Although I’m only 13.6 pounds lighter than I was when I started all this January 11, I’m feeling better physically. Climbing stairs doesn’t leave me aching as much, and my pelvic floor pain isn’t as chronic. My lower back isn’t getting much better—it feels worse some mornings—but maybe more exercise will help that.

If I could lose 10 pounds a month, I’d lose a whole person by Thanksgiving. That would be nice—but I expect plateaus and stalling between now and then. I remain in it for the long haul.

It’s almost noon Saturday and it’s 11 degrees out. I have a drive-up Target order to retrieve. Between the deep freeze and my gut feeling iffy at the moment, I’d just as soon stay home. #benignexistence

Here’s a point in this article that isn’t made enough: “The United States currently has among the highest rates of child poverty in the developed world, a trend exacerbated by the coronavirus pandemic.”

Second straight day without a salad. Less cranky this time.

I shouldn’t get used to this, as it’s the best way for me to get the 3 to 4 cups of fruits and vegetables I’m supposed to have each day. I will start anew tomorrow.

I totally live to hear references to the filioque dispute over the Nicene Creed on late night TV. Or, if you’re gonna get fussy about it, the Niceno-Constantinopolitan Creed.

If it turns out that my lousy day and wretched mood are linked to the fact that I didn’t have a salad today, I’m going to be really pissed off.

Dropped another 2.2 pounds this past week. Wasn’t expecting that much, frankly; I felt like I was slacking, or maybe this all is beginning to feel routine. Not that that’s a bad thing.

Honestly, I like the healthy regularity of the past few weeks: Most days, it’s a matcha kefir smoothie for breakfast, a high-protein lunch, and a big salad with a reasonable portion of protein and small portion of carbs for dinner, plus a smattering of snacks like grape tomatoes, an ounce of cheese, or a piece of dark chocolate. And at least 64 ounces of water (including Vitaminwater Zero and peppermint tea).

With my eating habits, I’m developing the kind of discipline I would really like in other parts of my life. Now I just need to bring that same kind of regularity to exercise.

Got a nice little celebratory screen grab when I posted my weight loss this morning. Looking forward to more. 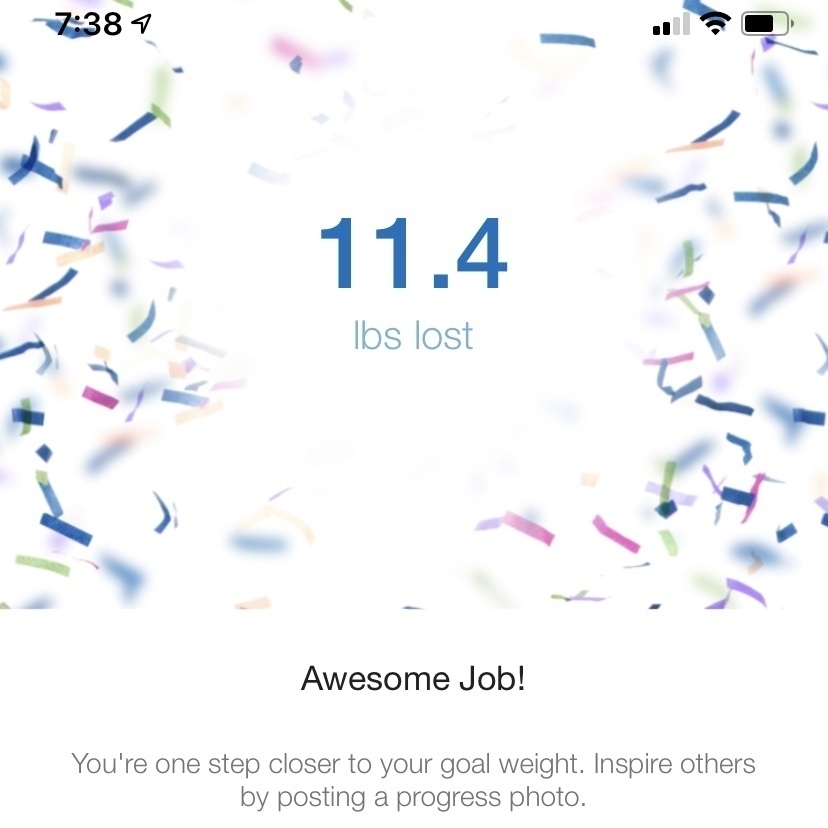 It’s been an interesting 24 hours. And the snow is still falling, albeit not as much. 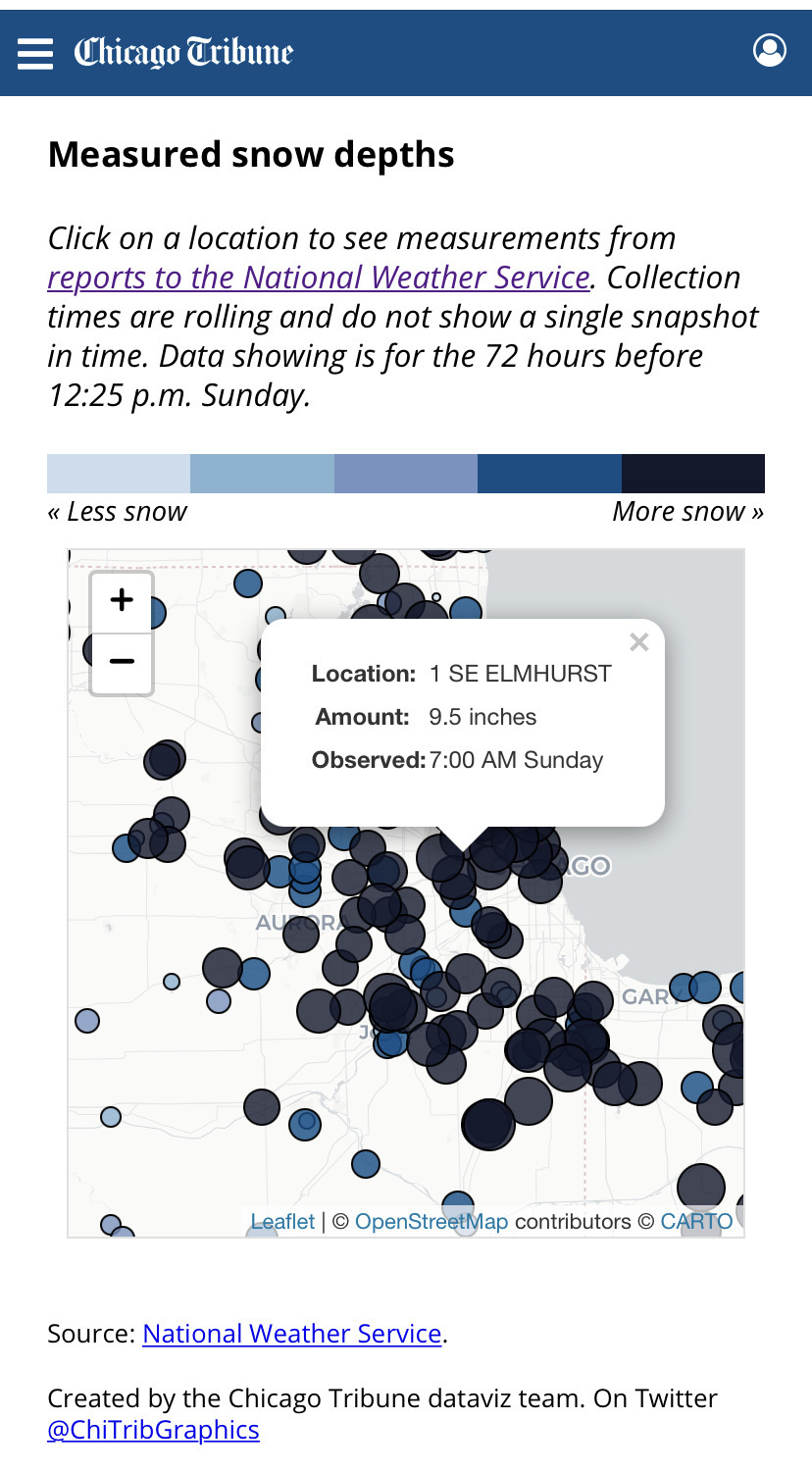 This SNL bit riffing off “Pretend It’s a City” (which I loved) was funny, but I wanted to like this more than I did. Could have used better writing and slightly less Scorsese.

Good morning from the Midwest. This is how I learned about this Jewish Space Laser business. This is also why I remain on Twitter. 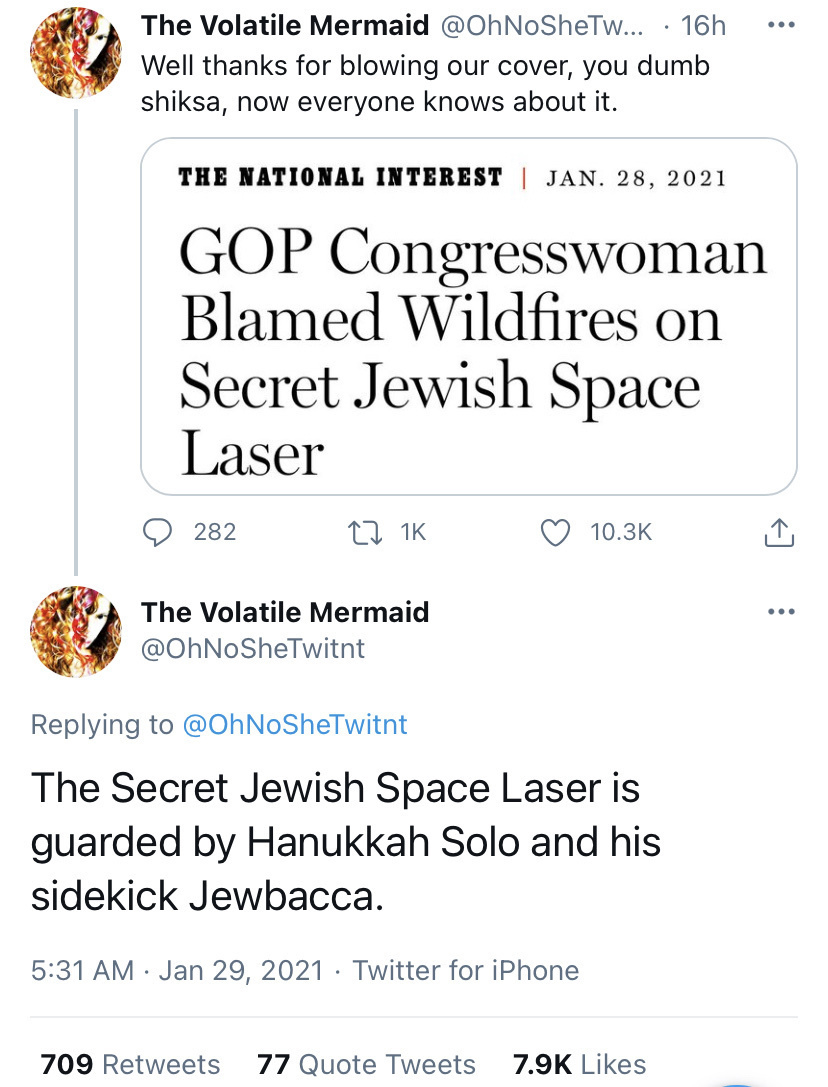 Tell me again why the BBC is a respected news source. 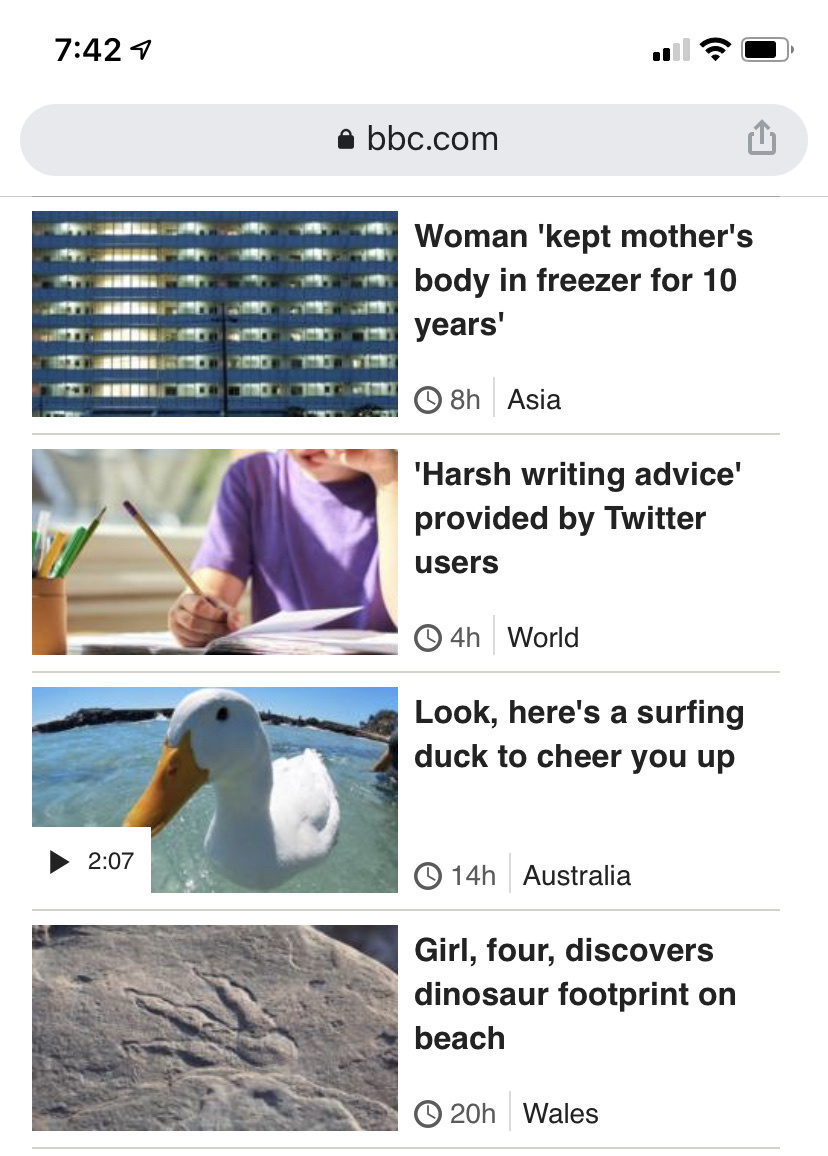 And now, the 12-year-old’s contest entry in the latest contest on the DragonVale subreddit. (I post them on her behalf.) Today was an unfortunate reminder that job cuts aren’t confined to the news industry.

Grateful that I still have a job, but it’s always a gut punch when a colleague is let go.

Farhad Manjoo on the effect of Trump’s Twitter presence (and subsequent ban): “The Pew Research Center reported this week that while the 116th Congress barely passed any substantive bills, its members collectively set records for their activity on Twitter. That dismal fact has to be seen as a legacy of Trump’s tweets — lawmaking, now, is more a matter of going viral than getting anything done.”

Just learned this morning that another cousin has died. Don’t know whether Eric’s death is COVID-related; he had had a severe stroke in 2019 and had been in a nursing home since then.

This is the third death in the past two months among my extended family. (An “uncle,” who was actually my mom’s cousin, died after a long illness – cancer, I think – earlier this month.) It’s all at once sobering and alarming.

Down another 3 pounds. Trying not to be disappointed after the previous week’s 6-pound loss.

After experiencing some palpitations early last week, I connected with the doctor and he has me going every other day on the phentermine. He says it takes a while for the body to get acclimated to that medication. Meanwhile, no problems on the diuretic.

I measure my blood pressure most days; it generally ranges from 150/80 to maybe 130/80, though I’ve seen it go down to 110/82. That stubborn diastolic number is annoying.

All in all, the low-carb approach has been livable. Lots and lots of salads, which is fine by me.

The exercise thing is taking a while for me to work into my day; this is more laziness on my part, though halfway through a short indoor walking video today, my back reminded me why I prefer chair workouts for now. And I’m trying to find ways to get more steps around the house. Not easy, but the steps add up after a while. It doesn’t help that the MyFitnessPal app, which I use to track my food intake and exercise, doesn’t always sync well with the Fitbit.

Sigh. It’s a long slog ahead.

There is definitely a distinction between being “nice” and being “kind,” as this Lifehacker piece notes:

Think of kindness as the act that accompanies (or replaces) your words. It’s silently helping a struggling mom of three kids unload her groceries into her trunk, rather than smiling and saying, “You’re doing a great job, mama,” as you breeze past. It’s bringing a pot of soup to your sick friend, rather than sighing sympathetically and saying you hope they feel better soon. You’re kind if you shovel your neighbor’s car out from under a pile of snow, stop to help a stranger change a tire, or pause to give an obviously lost person some directions—even if you’re not the type of person to bother saying “Bless you,” when someone else sneezes.

Over the weekend, I deleted my fourth Doomscrolling list of political Twitter accounts. I get why people might continue the outrage parade after the Biden inauguration, but I just don’t have the energy to watch it anymore.

Meanwhile, the Washington Post’s Jennifer Rubin lists 50 things that are better already, and reading it took my blood pressure down a few notches this morning.

In memory of Larry King and his late, lamented weekly newspaper column of random thoughts, boldfaced celebrities, and sometimes ridiculous nonsequiturs, I’m directing my stream of consciousness here and spitting a bunch of ellipses into it. Maybe it’ll be a regular thing, maybe not.

“It Is Well With My Soul” is one of my favorite hymns. I wish Catholic churches worked it into Masses. … The Anglican tradition is so superior to modern Catholic worship practice when it comes to hymnody. … Cardinal Cupich and Bp. Barron had excellent homilies today. … Can the rad-trad crowd please stop picking on Pope Francis?

Took my first Advil (or, in this case, an Advil Dual Action pill with ibuprofen and acetaminophen in it) in almost a week. Trying to avoid taking ibuprofen because I suspect it helps spike my blood pressure. … Trying to think of ways to have an avocado a day. … The keto crowd appears to have all the avocado recipes I could want. But it feels like a cult, and it annoys me. … What’s the Dalai Lama up to these days? … That old Fitbit I dredged up is working, but it doesn’t hold a charge for more than a day. I may need to get a new one.

The Tabernacle Choir has become part of my Sundays. Their weekly “Music and the Spoken Word” program gives me background music and a fine nonsectarian message while I write. … The Temple Square organ concerts are great, too. … I’ve always had a soft spot in my heart for the Mormons, even though they won’t call themselves “Mormons” anymore. … Gladys Knight, Steve Young, and Ken Jennings are my favorite Mormons. Oh, and that “Napoleon Dynamite” guy.

I’m obsessed with my Vitamin D, potassium, and magnesium levels. I use supplements to help my Vitamin D and magnesium needs, but apparently potassium supplements need to be used with caution. … Since the king of all potassium-rich foods, the banana, is a nonstarter in my new low-carb life, I’m looking at new sources of potassium. Best bets for me: spinach, yogurt, kefir, and avocados. … I kind of miss Herb Caen.

Speaking of San Francisco, I disagree with Kamala Harris on a bunch of things, but I truly like her. … Deleted my fourth “Doomscrolling” list from Twitter this weekend. … Wonder how long the PTSD will last after 4 years of the last administration. … It’s nice to have a regular churchgoer in the White House again. … Fran Lebowitz is my spirit animal.

I suppose I should be watching the NFC and AFC championship games. I’m not. … Not as much of a Blackhawks fan since they fired Joel Quenneville. … Last I checked, no one had nailed down a date when White Sox pitchers and catchers report. Anybody know? … Good lord, the keto cult annoys me. … I need to send Philip Rivers a thank-you note now that he’s retired.

Sadly, There’s no archive of King’s old “King’s Things” column. Jim Caple at ESPN created a long-ago tribute to it that refreshed my memories of those bizarre clusters of brain nuggets.

A longtime political aide to Jerry Brown, on how Joe Biden’s job ahead reflects what the former two-time California governor accomplished: “(Brown) didn’t have the millennial-ish urge to have everyone watch his every breath and every motion. It was refreshing in California, and it’s going to be incredibly refreshing for a fully exhausted country.”

This CNN piece – ”‘Fat but fit’ is a myth when it comes to heart health, new study shows” – illustrates why I’ve turned to a doctor this month to help me begin losing weight.

To be clear, I’m all about body acceptance and all that. But I’m tired of the chronic pain and other health problems that clearly stem from my excess weight. The COVID-19 susceptibility was the tipping point.

God willing, I’m in it for the long haul,

I do enjoy the social media memory stuff. 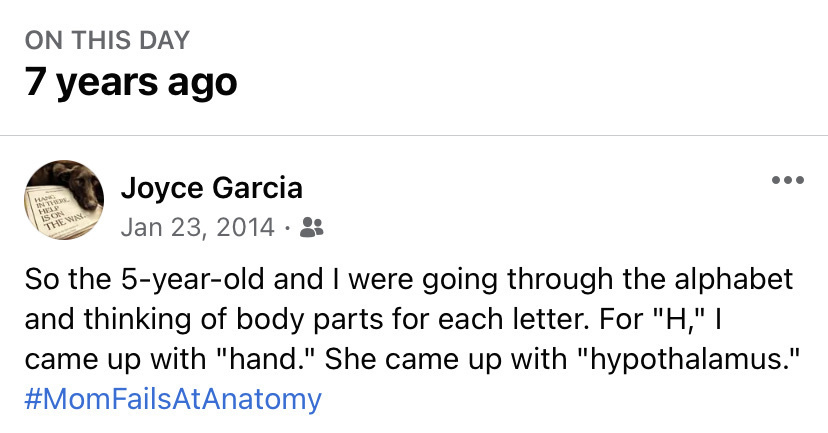